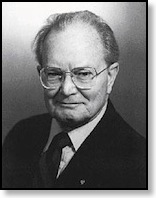 Allen Perdue Britton was a prominent figure in American music education and in musicology. Beyond his term as NAfME president, he also served as president of the Sonneck Society for American Music, was heavily involved in the Julliard Repertory Project, and worked on countless other boards and committees. Britton was band director in the public schools of Griffith, Indiana, and at Eastern Illinois University before WWII. Between 1943-1946 he served a two-and-a-half year stint in the Army, mostly playing in dance bands at service clubs, and he served with the military police in the Camp Custer German prisoner of war camp. Britton received a B.S. in Instrumental Music, M.A. in Education from the University of Illinois, and a Ph.D. in Musicology from the University of Michigan. He was the founding editor of the NAfME Published Journal of Research in Music Education. While at Michigan he was also director of the University Division of the national Music Camp at Interlochen. He was dean and professor emeritus in music education at the University of Michigan School of Music.